Among the projects followed over the years, who has allowed FIRBIMATIC to be recognized  as a leader in the sector of metal cleaning machines  is  the world’s largest particle physics laboratory, the CERN of Geneva.

THE NEED: a cleaning system for electroplating components

The excellent reputation as manufacturer of systems for washing special metal components and the advantages of a total  in-house production  are the reasons why CERN has chosen FIRBIMATIC for a so important project.

The cleaning system required was in fact destined to a new electroplating plant, where parts had to be washed before becoming extensions or spare parts of the LHC. 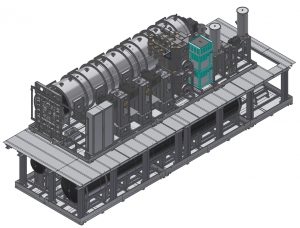 LHC: the largest and most powerful particle accelerator in the world

The Large Hadron Collider, better known as LHC, is the world’s largest and most powerful particle accelerator. It consists of a 27-kilometre ring of superconducting magnets with a number of accelerating structures to boost the energy of the particles along the way.

The aim of the LHC is to allow physicists to test the predictions of different theories of particle physics.

It is at Cern that in 2012 the Higgs Boson was identified for the first time, the particle that gives all matter its mass .

What is an electroplating factory

The electroplating is a technique, used most of the time for the industrial production, which allows to cover up a non-precious metal with a thin layer of a more precious or noble metal and can be passivated through an electrolytic deposition. The process is often used to protect metal structures from corrosion but it can also have decorative purposes.

In addition to the electronic field, where it is used for the copper interconnections of integrated circuits, the electroplating process is also used in the automotive and aerospace sectors to realize the protective coatings of cars and airplanes.

THE PROJECT: a cleaning system for special components

To the need of CERN in Geneva, Firbimatic has responded by manufacturing a special cleaning system with a useful basket of 800 x 8000 x 800 mm, max. 2 T.

This type of system is usually used to wash pipes, profiles and special components and is widely used in the aeronautics and military industry with a closed-loop system.

The operating system is similar to that of standard systems but it differs in the following technical features:

Designed to work on 3 shifts, these systems ensure a high quality internal cleaning level both when modified alcohol solvent is used and in the presence of superstabilized perchlorethylene, both used  in a “Near Zero Emission” hermetic circuit system.

The working cycle of the cleaning systems for special components has a duration of about thirty minutes: during the pre-wash phase the pieces are cleaned with high pressure hot solvent to eliminate all the external contaminants present on the surface.

Subsequently there is a phase of immersion with hot solvent: the basket containing the pieces moves and the hydrokinetic energy developed, facilitates the cleaning of the internal part.

The pieces are then vaporized with another solvent and finally dried in the same washing chamber to facilitate evaporation: the process ends with the activation of the refrigeration unit which allows the dry components to exit only when the concentration of residual vapors in the washing chamber has reached the values established by the legislation.